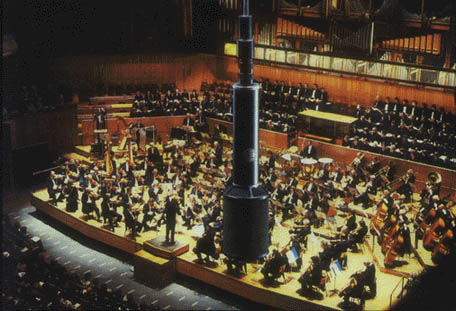 This site is no longer being maintained.
Ambisonics has moved on, and this site remains for
historical interest and those interested in the deep history of the subject.

Ambisonics is now everywhere - just do a search for it -
and far more advanced than it was when this site was established.

For an up-to-date discussion of the topic and access to modern tools
and other resources, please see John Leonard's Ambisonic Primer at A SOUND EFFECT
and Ambisonics Explained on the Waves web site.

Welcome to Ambisonic.net - the Ambisonic Network - a collection of articles, sources and links detailing the subject of Ambisonic surround-sound and digital audio technology, compiled by engineer/producer Richard Elen with over 25 years of experience of using the system.

If you're new to the subject of Ambisonics, hopefully you will find The Best Sounds Surround useful. For a more technical outline, see Dave Malham's Primer on Basic Ambisonics. Also useful as an introduction to the current state of the art is Ambisonics for the New Millennium. More detailed discussions of the principles and practice of Ambisonics are given in the other articles.

"Ambisonics goes further than stereo in that what it does (to first order) is to sample the acoustic field in such a way that the combination of the signals from all the loudspeakers in the array produces ... a reconstruction of the original acoustic wave field (both travelling and standing wave components). If a listener puts his head in the sound field, because the wavefronts are similar to the original, the perception of directionality and space should correspond to the original too. It is a "wavefront reconstruction" scheme in the small. The ear signals (crosstalk and all) will be correct if the reconstructed wavefronts are correct. This is just like natural hearing. Increasing the number of loudspeakers in Ambisonics (each fed its correctly-decoded signal) increases the accuracy of the reconstruction and the region over which it holds up. The interaural arrival-time differences also correspond to natural hearing in Ambisonics."

Comments on this site will be gratefully received, especially notification of errors (I scanned in some of this material as the original files had long since vanished; some OCR errors may have slipped by). If you find any broken links, please report them.

The interwoven circles logo was developed by Dr. Geoffrey Barton, the inventor of Trifield. It is based on the original Ambisonic logo which symbolizes the content of a B-format Ambisonic signal, consisting of W, the mono component (represented by the large outer circle); X (front minus back) represented by the vertical figure-eight composed of two circles; Y (left minus right), represented by the horizontal pair of circles; and Z (up minus down) which is represented by the smaller circle at the center, suggesting a figure-eight seen from above. It is a registered trademark of Wyastone Estate Ltd / Nimbus Records, and is used here by kind permission of the trademark holders. A great deal of formerly proprietary Ambisonic technology is now in the public domain. The majority of intellectual property not in the public domain is held by Dr Geoffrey Barton (including Trifield technology, so-called 'Vienna' decoders and items related to the Gerzon Estate). Contact Dr Barton for licensing details. It is customary for the Ambisonic logo and mention of the system to be added to record releases, etc, and this usage is encouraged. All trademarks and registered trademarks are the property of their respective owners and are duly recognised.

This site and its contents are copyright Richard Elen © 1998-2015.
Contents are available for teaching, private study and other applications.
Please contact me with information on what you would like to do